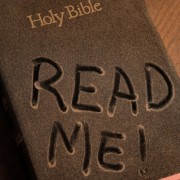 Over the years I have tried many different Bible reading plans that took me systematically through the Scriptures on a regular basis. For about three years I followed a plan I devised that took me through the New Testament once every three months and the Old Testament once a year. I have also used one year plans, topical plans, and even a plan based on the MacArthur method wherein you read the same book of the Bible daily- all the way through- for thirty days. Another plan I did for a while was one suggested by fellow Orthodox Christian Esteban Vazquez in his excellent two-part piece “On Reading the Scriptures”. Those two articles are well worth the read if you are interested in an Orthodox perspective on daily Bible reading.

Although I like that plan a lot I found that it did not allow me the time I would have liked to think about the daily passages or look at the patristic commentaries if I wanted to go deeper. To be fair, Esteban says as much in the articles but I still wanted to slow things down a bit without taking two to three years to get through the Bible.

As an Orthodox Christian, however, I have found myself pulled in two contradictory directions: should I read Scripture quickly for familiarity with the whole of the Bible or slowly to meditate on it in depth at the expense of not ever getting to vast swaths of Holy Writ? How can I read the whole Bible in a reasonable amount of time while still doing so slowly enough to internalize its message? What is the best way to go deep and wide at the same time?

After years of searching I have not really found a method that gets me through the Bible in a year while still keeping me in sync with the readings in the Lectionary of daily readings. So, I have been spending a good deal of time over the last couple of years pondering on how to integrate these two lofty goals in a way that works for me.

In the Orthodox canon of Scripture there are approximately 1350 chapters: 260 in the New Testament, 905 in the Old Testament, and 185 in the Deuterocanonical/Apocryphal books (219 if you add Second Esdras and Fourth Maccabees). If one were to follow the daily readings of the Lectionary for a year he would read the entire New Testament (minus the book of Revelation which is not in the Lectionary because it was universally accepted into the New Testament only after the Lectionary had already been completed in the fourth century) and he would read through just about all of Genesis, Proverbs and Isaiah (the daily readings prescribed for the weekdays of Great Lent). That’s a lot of Bible but it still leaves over 900 chapters unread.

Another issue I wanted to consider was that in the Orthodox approach to Scripture all books are not of equal importance in usage. Some books have pride of place both in our services and in the writings of the early Christians and the Church Fathers. Preeminent among these are the Gospels and the Psalms. On the one hand, using a normal “through the Bible in one year plan” does not give any extra attention to these parts of Scripture while on the other hand, following the Lectionary alone means no Gospel readings during the weekdays of the forty days of Lent.

The following plan which I have put together tries to address most of the factors that were important for me in a Bible reading plan without being overwhelming. Most days one is reading an average of four chapters which still leaves time to think about what has been read or to look up interesting questions in commentaries or other study helps.

My three main ingredients in a reading plan and how I chose to address them were:

1. Read the Scriptures in sync with the Church- Every day the Lectionary readings are included. This gets us through the entire New Testament (minus Revelation) and also through Genesis, Proverbs, and Isaiah once per year.

2. Emphasize those Scriptures which the Church has most emphasized- Using this plan we can read the Gospels and the Psalms through twice a year. The four Gospels are read once through each year following the Lectionary. This plan also calls for them to be read through again during the forty days of Lent (two chapters on weekdays/ three chapters on weekends). Since this additional Gospel cycle ends on the Friday before Lazarus Saturday I also added some passages from Matthew for Holy Week. Each day’s reading corresponds to what Jesus was actually doing that day so we can travel together with Him to Pascha. I only used the Matthean passages because I thought it might be too much to add the parallel passages from the other Gospels for a week when we are spending a lot of extra time in church.

There is also a chart for Psalm readings that takes us through the Psalter twice annually. The versification system for this follows the Septuagint but includes the Masoretic Text chapter and verse numbers in brackets for ease of use in case you are not using an Orthodox translation. If you are feeling particularly pious you might substitute a stasis or even a kathisma from the Psalter for your daily reading but I think a lot of people will find averaging a psalm a day to be more manageable considering the rest of the Scriptures we are trying to cover as well. Organizing the 151 psalms (with two different versification systems) into two cycles for a total of  365 readings in a way that made sense was a bit of a challenge!

3. Read all the Scriptures not covered in the daily Lectionary- Taking out the Psalms, Genesis, Proverbs and Isaiah (which are covered elsewhere on this plan) and adding the Apocalypse (not covered in the Lectionary’s New Testament readings) we can cover the remaining books of Scripture by reading consecutively through them at the modest pace of two chapters daily during the week and three daily on the weekends.

I like to further divide my daily readings into two separate sittings. In the morning, when the day is new, I like to start off with the New Testament. Usually something will jump out and grab my attention as something to think about or to put into practice. I might write this verse on an index card and make it my marching orders to try and apply or understand before my next sitting later in the day. In the early evening, when the day is old, I like to do the Old Testament readings for the day. By doing one’s second reading in the early evening there is still time to meditate on or act upon any special verses before going to bed. I can’t say that I follow this habit every single day but I can say I like the days that I do much better.

Have I finally found my silver bullet for daily Scripture reading? Only time will tell. I am offering it now for the benefit of anyone else who may find this methodical approach useful and also for any helpful tips from my savvy readers to improve it.